Warm and welcoming, Green Heart Natural Health is a naturopathic health practice offering holistic services and support including nutritional therapy, GAPS diet, herbal remedy, nutritional supplementation, wellness coaching and flower essences to naturally help your body come to peak health. At Green Heart Natural Health we focus on understanding you as an individual and seek to apply a personalised approach to healing and maintaining your health using natural therapies and treatments.

We are located in Marrickville, just 9km from Sydney CBD. At Green Heart, it is our mission to improve your health and help your body achieve optimum wellbeing. We do this by working with you to uncover the root causes of any health issues, then use the right combination of natural health modalities for your situation.

The name Green Heart has special meaning. Green is the predominant colour of nature, where the principles of naturopathy and natural healing stem from, while the heart is the part of the body which provides support to all other functions. Green is also the colour of the Heart Chakra, one of the seven spiritual energy centres in the human body, according to ancient Sanskrit principles. The Heart Chakra represents the point at which physical and spiritual energy meets within the body, and when it’s balanced it brings about inner awareness, peace, compassion and – not surprisingly – love. These are all important traits for maintaining the long-term benefits of any health treatment. Finally, green represents the zodiac sign of Libra. Libra is the sign of balance, something we aim to help you achieve with your body and your health. 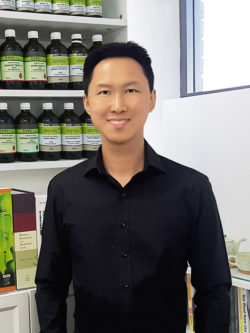 Bernard is the founder and practitioner at Green Heart Natural Health. His own journey to optimum health inspired his qualification and career in naturopathy.

Several years ago, Bernard began experiencing severe digestive issues and sudden, rapid weight loss. At his worst, he was losing around 1kg a week. He developed neurological problems, hand tremors, cognitive and motor skills disturbances and muscle atrophy, as well as extreme fatigue.

With no idea why his body was failing him, and no clear diagnosis available from the numerous conventional doctors he’d seen, Bernard found himself visiting a naturopath.

After an in depth consultation and a couple of tests, the naturopath found the reason for most of Bernard’s symptoms: he had mercury poisoning! A dental amalgam extraction he’d had done some time earlier was not carried out properly and caused a toxic build up of mercury.

As well as the mercury poisoning, it was discovered that Bernard was suffering from Candida and SIBO, an infestation of gut bacteria which grow in the small intestine, making it impossible for the body to absorb and digest food properly.

These diagnoses were the missing link that no one, including Bernard, had previously considered. With the guidance of a naturopath, he underwent detoxification for the mercury poisoning, adding supplemental nutrients and making dietary changes to treat the SIBO and Candida.

Visiting that naturopath eventually saw Bernard’s health completely turn around, and in the process he discovered a calling. He returned to study after a decade in the corporate world, qualifying as a naturopath. He now aids other people to recovery and better health, as he’s experienced himself through natural healing.

Eating Fish on a Budget

For appointments outside the above hours, please inquire here. We will try our best to accommodate.